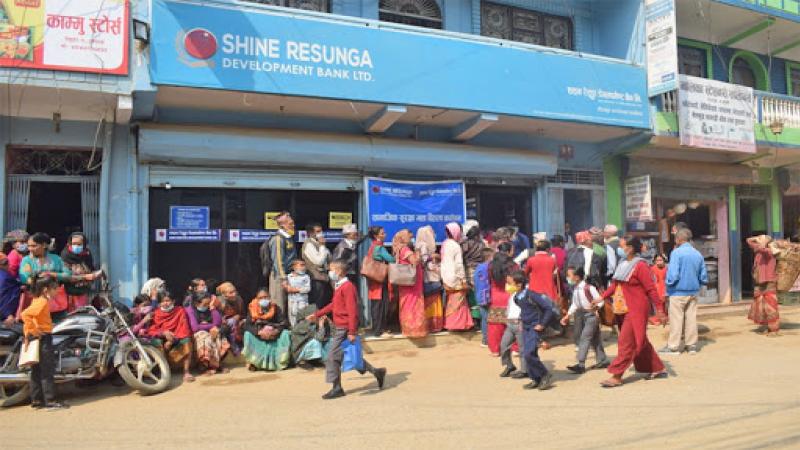 Aug 9, Kathmandu- Bikinia of Dhinanda Municipality-5 Kotila village came to Kolti Bazaar on foot for 5-6 hours to get social security allowance. But he was too busy to get the documents for Bhattalin. He was able to get the allowance only after gathering the proof of disability. He is a person with a disability.

He said that he had been receiving the allowance on a quarterly basis in the backyard before but he had to suffer a lot as he had to collect it from the bank. He said, "Uneducated people have to write on checks, have to sit in line for hours, have to suffer a lot due to tiredness of walking."

"I am crippled in my legs. My mother is 82 years old. I can't walk. If my mother doesn't come to the bank, she won't pay the allowance." The mother has not been able to get the social security allowance as she could not bring it, 'he said.

Dhan Bahadur Rokaya of Budhinanda Municipality-4 Ghodakot also said that it was very difficult to get the allowance from the bank. Rokaya complains that the disabled and the elderly get sick when they have to wait in line all day. "I left my house at 6 o'clock in the morning without even drinking water. After walking for 4 hours, I got in line at the bank at 10 o'clock. I am in line till 3 o'clock, "I don't know when the turn will come," he said.

Similarly, Dalbire Nepali, a 91-year-old senior citizen of Budhiganga Municipality-9, Juwapani, also said that he was suffering from the banking system. The Nepali said that it would be better if there was an arrangement to distribute the allowance to the senior citizens from house to house. He said, "The bank is not in a suitable place. You have to walk for a day. You can't even reach the bank on foot." '

But now, due to the government's ban on controlling and preventing the epidemic in Corona and the road being blocked due to rains, it has become difficult to walk to the bank through the forest.

They have demanded that the allowance should be distributed to the households as before. Ram Dutta Neupane, acting executive officer of the municipality, said that the municipality has made public the schedule of July allowance in coordination with the bank after the citizens started suffering. The municipality has stated that discussions are underway on how to provide social security allowance at home for the disabled who cannot come to the bank.