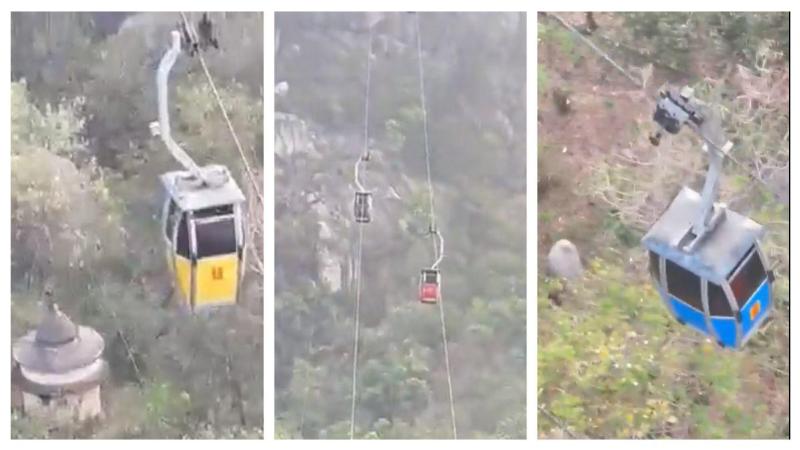 Apr 11, Kathmandu- On Sunday, some cable cars in a ropeway collided with each other at Trikut hills close to Baba Baidyanath Temple in Jharkhand's Deoghar district.

At least two person has died while dozens remain stranded mid-air in a row of 12 ropeway trollies that collided with each other in Jharkhand's Deoghar district, reported news agency PTI quoting a senior official. The accident occurred on Sunday afternoon at Trikut hills near Baba Baidyanath Temple.

Several tourists have sustained serious injuries and the rescue operation is still on, according to the PTI report. "I have been reviewing the situation since yesterday. We have sought help from NDRF, IAF, experts, commandos. Rescue efforts underway since early this morning," Jharkhand chief minister Hemant Soren told reporters.

Deoghar Deputy Commissioner Manjunath Bhajantri said that a team of the National Disaster Response Force (NDRF) has been working since Sunday night to rescue the trapped tourists and two helicopters of the Indian Air Force (IAF) have been involved in the operation which is now on for almost 20 hours.

A recce was conducted by one of the Mi-17 helicopters in the morning. "All efforts are being made to airlift the tourists to safety. An NDRF team working since Sunday night has rescued 11 people. Locals, too, are helping with the rescue operation.

Ten people have sustained serious injuries in the incident, of which one of them died late last night," PTI quoted Bhajantri as saying. The official said the probe into the cause of the accident would be initiated only after the operation gets over.

But maintained that a “technical snag” seemed to be the reason prima facie behind the mishap, reported PTI. Bhajantri added that the ropeway was being run by a private company and the operators fled the area shortly after the accident.