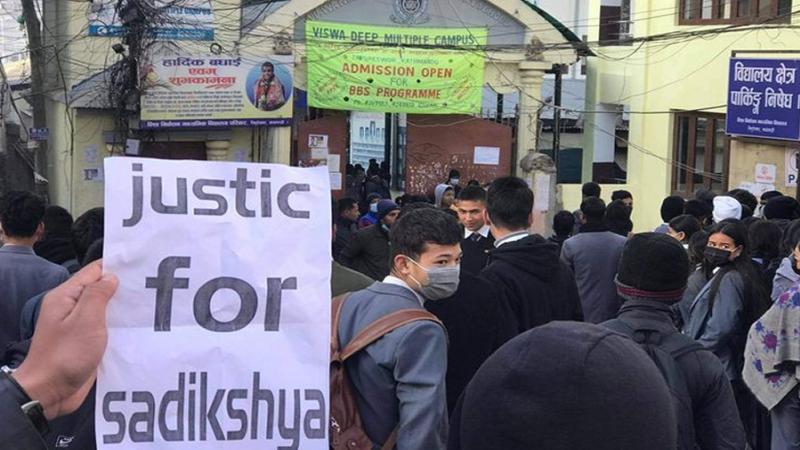 Dec 8, Kathmandu: The students of Vishwa Niketan Mavi in Tripureshwar protested saying that a female student of the management faculty who was studying in class 11 committed suicide.

Sadiksha Chaudhary of Saptari, a resident of Sanepa, was found dead on Wednesday night. The students have demanded justice saying that he committed suicide due to the mental torture of the head of the discipline.

The principal of the school Herambaraj Kandel denied the allegation of mental torture. He said that after he was absent from Sadiksha school for several days, he was interrogated and advised to come regularly. He said that since he was absent even then, he sent a reminder on Wednesday to bring the parents.

Navraj Lohani, the assistant staff member of the school and Head of the Discipline and Counseling Department, suspended the student for giving him 'torture'.

Principal Kandel said that according to the demands of the students, the meeting of teachers, parents, school management committee, and public representatives has suspended Discipline and Counseling Department Head Navraj Lohani.

After assisting in the legal process, the protesting students returned home. The body of the deceased Chaudhary has been taken to Patan Teaching Hospital for post-mortem.