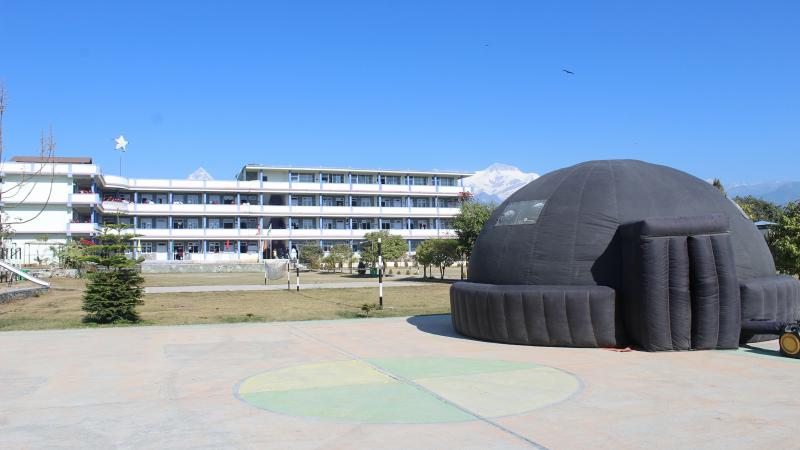 Dec 8, Kathmandu: Science is also one of the school-level subjects. Towards the last page, there are space science materials. It is mandatory to have experimental classes in science. But many schools in Nepal lack physical infrastructure.

In such a situation, some normal activities of physics, chemistry, and biology are also taking place. But space science is being limited only to classroom teaching. Comparatively speaking, although the situation is less in urban areas, the condition of the fruit crop is the same.

Students who have access to the Internet learn more online than from books. But rural students do not have this facility. We also went through a similar situation. While in school, only theoretical knowledge was gained. We could not even imagine the experimental class of space science. He used to learn computers only after passing SLC.

This situation from long ago is still the same in some places. While conducting space science classes in various schools, we have found that there is both a lack and a need for this. Many students are interested in this subject. They are interested. However, there is a situation where they are not able to give practical and practical education about this. The main reason for this is the lack of technology and manpower.

Except for one student, most mathematics education is limited to books only. There is a compulsion to take the exam. There is still a prevailing belief in society that one should become a doctor or an engineer. Astronomy and astrology are thought to be the same thing. However, this situation is created when the government does not prioritize these issues.

Even now many schools do not have good science labs. There is a lack of technical skills in schools. Aerospace engineering studies have just started at the undergraduate level. Many students do not know that it is taught in Nepal as well. The reason is that they are not informed about it.

There is no way to tell them about this issue. They say that whatever is told to the students from childhood, they will become that. There are many ways to arouse students' curiosity about space science. It is important to use this medium a lot, which we are also doing.
We (Kantipur Planetarium) are reaching different places in the country to provide space education to students. For that, we use 'Planetarium' technology. A planetarium is very useful to explain the universe to students.

What is a planetarium?

Simply put, a planetarium is a virtual lab. It is a kind of theater to observe the night sky. It means 'constellation' in Nepali.

It is of two types, permanent and temporary. If they are built with the purpose of keeping them in a certain place forever, then they are called permanent planetariums, and the technology that can be easily moved from one place to another place is called a temporary planetarium.

The planetarium is used for space education. It is useful to understand astrology. It is also used in the training of some celestial navigation. From this, mathematics can be understood in a simple and logical way.

Apart from this, it comes in handy to know and learn about different branches of science. It is very useful to explain the mysteries of the universe to the students. They can observe the things about space that they have read in books from the planetarium. Like: planets, satellites, stars, constellations, etc.

In addition to observing the sky, you can watch videos on topics such as the universe and human civilization. In the planetarium, astronomy can be viewed through real-time simulation. Some planetarium software is used in this. By putting a place and time in the software, the celestial bodies visible from there can be seen in the planetarium.

It can be seen which celestial bodies are being seen where, where, and how. Corporate houses are also using it for entertainment in various functions.

Laptop, Fan, VR, and what is the difference?

Let's see an example to understand this; You can watch movies from home without going to the theater. Exactly the same applies when observing from a planetarium. Things like the software used in it, sound, and environment make it different.

Some of the students who have observed the sky from this give feedback that they have come 'sitting in space'. When watching videos related to space from devices like laptops, and mobiles, only one/two people can watch them on the importer screen. But many people can see 360 degrees at the same time inside the planetarium. Virtual Reality (VR) glasses are not used in the planetarium.

VR can only be used by one person. If VR is used, it is not considered a planetarium. The fun of sitting and observing in the planetarium with friends and teachers is unique. The atmosphere is the same here. Especially the experience is different.
It gets dark as soon as you enter the planetarium. Students sit comfortably. The software and systems under the International Planetarium Society (IPS) are used. The video content viewed on it is different.

There are many benefits of running a planetarium in schools for the purpose of promoting space education. The student's curiosity about the universe is solved. Apart from their own school, nearby schools can also benefit.

It is not impossible for big schools to keep small planetariums. It requires technical skills. A technical group of six or seven people can operate it with fun. It would be ideal if the school had a permanent planetarium. The planetarium can be placed by the school in the hall/auditorium. Or adults in school can keep it in class.

The content of the universe can be shown to the students in a classroom manner. Apart from these other branches of science like; Organisms, chemicals, environment, etc. can be shown. Schools with large campuses and large numbers of students would do well to have a planetarium.

Apart from students, teachers, parents, and community people also benefit from this. It doesn't mean that you can't eat in a place where there are fewer students.

But the planetarium may not come into use. The planetarium built with the money should be put into continuous use. Before placing a planetarium in a school, one should consider how effective it will be.

Elections for having planetariums in schools

Especially the planetarium is 'indoor' (inside the room). There are many schools in Nepal that lack land and buildings. This can be a matter of choice in keeping the planetarium. We usually have a planetarium at school. Sometimes wind, rain, electricity, etc. come as problems.

Now we are having problems to show the universe to students with physical disabilities through the planetarium. We are also working on its solution.

Similarly, there are some choices like the price of the planetarium and the technology required for operation. When building a planetarium, the cost depends on how much, what to make, and how to keep the projector and telescope. The software used in it, the perimeter of the planetarium, etc. also makes a difference.

Even the government has not prioritized space education. If the government wants, it can bring the planetarium into operation at the state level or model schools. The country has gone to federalism. Local governments can also set up these schools in their area. Likewise, it can be done in public places that are convenient for everyone.

Abroad, planetariums and observatories are usually built at the provincial and city levels. Because of this, everyone along with the students can understand the universe. Since many initiatives are being taken to increase space education from the private level, it is seen that the government has to do a lot of work. If we work on it from the school level itself, this sector can flourish. It will benefit individuals, society, and the nation as a whole.