Who Will Be New Speaker For HoR?(With Video) 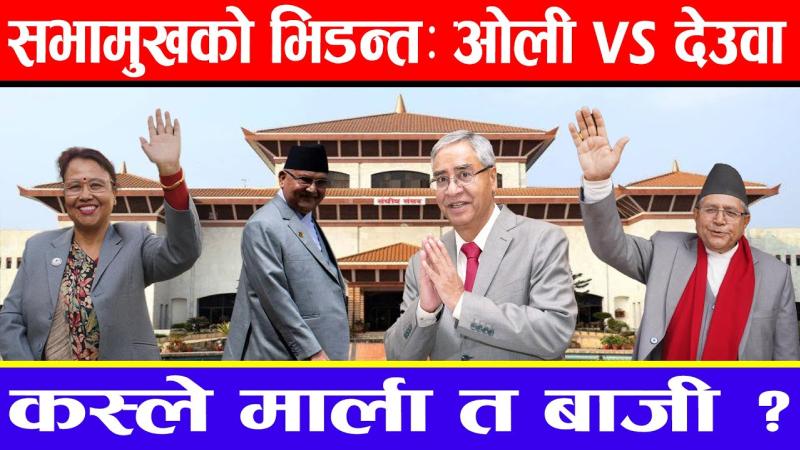 Jan 20, Kathmandu: The House of Representatives(HoR) is getting a new speaker today. Only two candidates have been nominated for the post of Speaker of the HoR.

The election of the Speaker will be held at the meeting of the HoR at 11 am. In that meeting, there is an agenda for the proposer to propose and the supporter to be elected as Speaker. CPN (UML) MP Devraj Ghimire and Nepali Congress's Ishwaridevi Neupane have been nominated by the opposition party, so there will be tough competition between the two people.

Ghimire, who has the support of the ruling party, is almost certain to become the speaker. So far only Congress seems to be supporting Nyipane. Congress believes that parties other than the alliance will also support it. Both the candidates for Speaker have been claiming that they will win.

Who will win the bet?
Overall, the coalition candidate Ghimire's lead is heavy. Out of the 275 MPs in the HoR, 138 votes are required for a majority, and the parties that proposed and supported him are 79 from the UML, 32 from the Maoists, 20 from the RSP, and 145 from the RPP. It is seen that the votes of these four parties of the ruling coalition will easily reach the majority.

As the Janata Samajwadi Party (JSP), which supported Prachanda's government, and Janmaat expressed dissatisfaction with the alliance, it is seen that the Speaker will get fewer votes than the PM. Jaspa has 12 MPs. However, JSP parliamentary party leader Ramsahay Prasad Yadav informed that the party will decide who to support only before the election of the speaker.

After not getting the chosen ministry, the Janmat Party has also expressed dissatisfaction with the alliance. The party participating in the government, Janmat Party, has 6 MPs. In other words, there is confusion as to where the votes of a total of 18 MPs of these two parties will go.

The Civil Liberties Party, which has four MPs, is also dissatisfied. However, it is said that he will vote in favor of the alliance. There are three independent MPs. In which two MPs supported Prachanda. In other words, in the current situation, the coalition has 145 support from four parties and 151 support for civil emancipation and independence.

There are 89 Congress MPs in the opposition alliance. However, as Tek Bahadur Gurung was suspended, only 88 MPs will vote. There are 10 MPs from the United Samajwadi party that supported the Congress. The Democratic Socialist Party (DSP) is also going to support Congress. At present, 102 votes are seen in favor of Congress candidate Neupane.

Rashtriya Janamorcha and Nepal Workers Peasants Party(NWPP) have 1 MP each. There is a possibility that they will stay still. Similarly, 1 independent MP is not open anywhere. Looking at it this way, it does not seem that even if the MPs of JSP, Janmaat, and other parties who are dissatisfied with the power coalition are added to Congress, it will not get a majority. Even if all Jaspa, Janmat, Rastriya Janamorcha and NWPP voted for Congress, only 123 votes.

There is a constitutional provision to elect the Speaker from among the members of the HoR within 15 days of the first meeting of the Federal Parliament. The senior member of the HoR, Pashupatishamsher Jabara was organizing the meeting until the Speaker was elected.